Edward Telles and Christina A. Sue

Mexican Americans are unique in the panoply of American ethno-racial groups in that they are the descendants  of the largest and   longest lasting immigration stream in US history. Today, there are  approximately 24 million Americans of Mexican descent living in   the United States, many of whose families have been in the US for several generations. In Durable Ethnicity, Edward Telles and Christina A. Sue examine the meanings behind being both American and ethnically Mexican for contemporary Mexican Americans. Rooted in a large-scale longitudinal and representative survey of Mexican Americans living in San Antonio and Los Angeles across 35 years, Telles and Sue draw on 70 in-depth interviews and over 1,500 surveys to examine how Mexicans  Americans construct their identities and attitudes related to ethnicity, nationality, language, and immigration. In doing so, they highlight the primacy of their American identities and variation in their ethnic identities, showing that their experiences range on a continuum from symbolic to consequential ethnicity, even into the fourth generation. Durable Ethnicity offers a comprehensive exploration into how, when, and why ethnicity matters for multiple generations of Mexican Americans, arguing  that their experiences are influenced by an ethnic core, a set of structural and institutional forces that promote and sustain ethnicity. 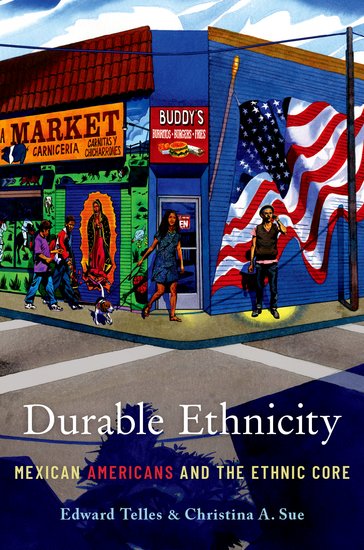